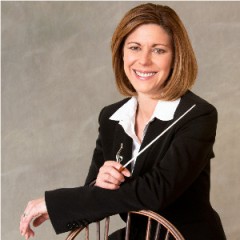 Jacinda M. Bouton, a Lone Tree resident, has been the Principal Conductor and Music Director of the Lone Tree Symphony Orchestra since its premier in 2000. She is also Musical Director of the Denver Concert Band and was formerly Director of Instrumental Music at George Washington High School in the Denver Public Schools. Jacinda is an active conductor, clinician and adjudicator throughout the Rocky Mountain Region, having served as Co-Director of the Breckenridge Music Institute’s Summer Music Camp. While serving as Director of the Denver Junior Police Band, Jacinda directed the group in a variety of highly visible performances in the Denver area and took an active role in the rebirth of this Denver Institution.